The Compost Heap, commonly referred to as the Republican dominated Texas House has produced some ‘fertile’ legislation this session.  A few notable bombs include an assault on Texas school children; Poll-Tax-revisited and Voter Suppression, via Voter ID; the Loser Pays “tort reform”; along with funding cuts to the Volunteer Firefighter’s Assistance Program (during a record drought season).   These Good ‘Ol Boys aren’t bothered by the petty, unimportant things like the economy, unemployment, education, or uninsured Texan’s, because they’ve got some fishing to do.

Yes, it’s true.  It is now a 3rd Degree Felony for anyone caught cheating in a Fishing tournament with a prize of $10,000 or more (HB 1806).  Rockwall Republican Dan Flynn wrote the awe-inspiring bill.  The House passed it 142-4, the Senate unanimously.  Bobby (friend of John Wheat Gibson)  said, “I guess we will need a new agency or sub-agency and a new Assistant Attorney General to monitor, enforce, and litigate fishing tournaments.”   Cheating in a fishing tournament could land you in jail for 2-10 years, and carries a fine of up to $10,000.  Wow.

Surely, this sinful act of SOCIALIST GOVERNMENT REGULATION is not endorsed by the Tea Party or their Tea Stain constituents.  Or, perhaps when the Republican controlled House  authors,  endorses, and passes  laws to regulate  and monitor, it’s good public policy, and not some evil attempt by the by the Socialist Left-Wing Conspirators to promote BIG GOVERNMENT.

“In all criminal prosecutions, the accused shall enjoy the right to a speedy and public trial, by an impartial jury of the State and district wherein the crime shall have been committed, which district shall have been previously ascertained by law, and to be informed of the nature and cause of the accusation; to be confronted with the witnesses against him; to have compulsory process for obtaining witnesses in his favor, and to have the Assistance of Counsel for his defense.” But, what if there is still doubt?

It’s done. He is dead. Despite the doubt, in spite of the public outcry, Troy Anthony Davis was executed. Time of death, 10:08 CST.

As of January 2011, 266 people, previously convicted of serious crimes in the United States, had been exonerated by DNA testing since 1989. The Innocence project estimates 200,000 innocent people are presently behind bars in the United States. How many of them are innocent?

Think about the thousands of people who are wrongly convicted each year, or those who will die as a result of wrongful convictions. Get ANGRY! Now, channel that anger toward changing the system. Get involved.

How does one live under the microscope, in a society driven by selfishness and hate, yet still manage to speak out against insensitivity to the human condition.   Can a society enslaved to hate & fear be reached by words alone?  Persuaded perhaps, to “sheath the sacrificial knifes” and lift the societal curse.  Or, is the truth wasted on the deaf ears of those who cling to false dogmas (while praying at the altar of deception)? 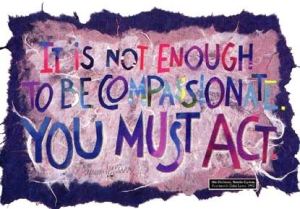 My incontrovertible sense of humor can’t help me laugh this one away.  I simply cannot laugh away the pain.  Pain caused by the realization that our nation is plagued by hate, fear, and indifference.  What happened to humanity?  Have we lost our ability to love each other?  When did humanity become so disconnected that it’s common place to walk past our wounded brothers or sisters without so much as acknowledging their pain?  I really need to know.  The idealist in me doesn’t want to become like the machine.    Spend a minute tonight thinking about this.  To
those who can hear me, speak out!   We are humanity… “If you prick us, do we not bleed?  If you tickle us, do we not laugh?  If you poison us, do we not die? And, if you wrong us…[does anyone really care]?  (Some of us do); It’s time for a compassion renaissance.  Will you start the revolution?

“I’m going to keep fighting for middle-class families, for working people. Whether I fight as an outsider, or from the floor of the Senate, I will continue to fight.” EW

If Texas was still in the capable hands of Ann Richards, I’d move to Massachusetts and lend EW a hand. A real champion for the people. Good Luck.

For more information on how you can get involved: http://www.elizabethwarren.com/

“The National Labor Relations Act prohibits companies from taking any actions, whether firing employees or relocating a factory, against workers for exercising federally protected rights that include forming a union or going on strike.”

“It makes it easier to shift jobs overseas,” he said. “It eliminates the only remedy to force companies to bring back work from overseas. This outsourcers Bill of Rights is not only bad for the interests of workers, it’s bad for the economy at large.”Yep, that about sums it up…

If Democrats can’t win when Republican are bragging about letting poor people die because they don’t have  insurance, we don’t deserve to win! -@Pres_Bartlet Fictional Former President

Indulge in a momentary lapse of utopian thought, that will (no doubt) fade, faster than the next headline appears…Perhaps,the collective reflection on the anniversary of 9/11  will spark familiarity of the commons.   And, perhaps this new enlightenment will become the light house beckoning us from the churning sea of political division.

The anniversary has been marked with memorial offerings & somber reflections.   One of the most compelling-a brilliant reflective summation by Leon Wieseltier …

On Thursday night, The New Republic, in partnership with the Kennedy Center and the Pentagon, commemorated the tenth anniversary of September 11, 2001. The event (which can be viewed in its entirety here.)  Remarks by Leon Wieseltier, The New Republic’s literary editor, on what we, as Americans, affirm:

“Though we encounter it as suffering,  grief is in fact an affirmation. The indifferent do not grieve, the uncommitted do not grieve, the loveless do not grieve. We mourn only the loss of what we have loved and what we have valued, and in this way mourning darkly refreshes our knowledge of the causes of our loves and the reasons for our values. Our sorrow restores us to the splendors of our connectedness to people and to principles. It is the yes of a broken heart.  In our bereavement we discover how much was ruptured by death, and also how much was not ruptured. These tears lead directly to introspection…
….The obscenities of September 11, 2001 exposed the difference between builders and destroyers. We are builders. Let us agree, on this anniversary, that it is an honor to be an American and it is an honor to be free.”  Read the entire moving speech.